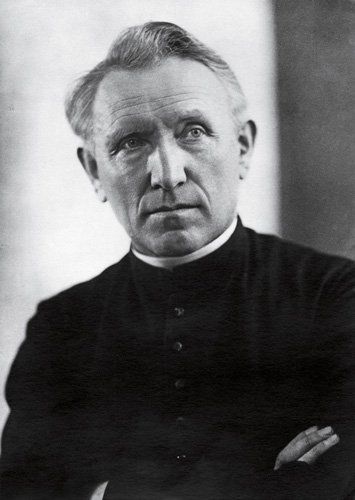 Father Joseph Bovet was born in Sâles (Gruyère) in 1879 and died in Clarens (Vaud) in 1951. A true leader of men and a remarkable conductor, he became, during the first half of last century, the most popular composer of the Fribourg area, indeed, of all French-speaking Switzerland.

His "Vieux Chalet" went around the world. No-one understood the people better than he did. He found the ideal formula for the time, writing simple things within the grasp of the most humble. The product of a farming world, Father Bovet made marvellous use of the simple and musical dialect of the Gruyère cowherds.

He often wrote his own texts and left us, in them, some real little masterpieces. One of these is "Nouthra Dona di Maortsè" which, quite recently, won the admiration of listeners in the Middle East. for wind band or brass band