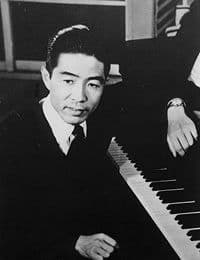 Shinichi (pronounced Shin-ichi) Takata, son of a wealthy tradesman, was born in Tokyo in 1920. His musical education began at the age of eight. He studied composition and music theory privately with Yoshio Hasegawa (1907-1981) an exponent of the French style. One year later, in 1937, he entered the Tokyo Music School, where he not only continued his formal studies with Hasegawa, but also with...
Read more

About Sonatine in F

Shinichi Takata’s Sonatine in F major is the earliest piece of original trumpet music ever written by a Japanese composer.

In the first movement, there is an exposition section which presents two graceful motives that are dynamically developed with distinctive rhythms that are ultimately resolved in a well-defined tutti. In the second movement, the music begins with an elegiac fanfare followed by a march heard over a solemn piano accompaniment. The fanfare then returns to bring the march to an end with a distinctive Debussy-like piano chord. The music then proceeds attacca to the third movement, which features some very impressive French sounds and a feel of syncopation that seems rooted in the jazz idiom of the time.