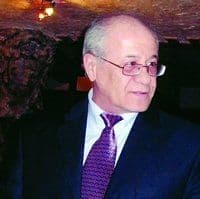 Hrachia Melikyan, a talented exponent of the Armenian contemporary  school of composition, was born in 1947 in Yerevan, Armenia. He graduated from the Yerevan State Conservatory’s Department of Composition in 1972. During   the 1960’s and 70’s, he represented the contemporary classical school, advancing his own individual concepts and personal compositional style to the national music of his native country. With the skillful blending of international musical developments with the idiosyncratic peculiarities of the national music of Armenia, Melikyan forged a characteristic and recognizable individual musical style. He became the laureate of several important prizes and was General Secretary of the Union of Composers and Musicologists of Armenia from 1991 until he passed away in 2006.

The majority of his compositions are instrumental works, including symphonic, chamber, choir and recital pieces, as well as film music, which have been performed worldwide.